Cabucgayan, Biliran— A 7-yr old Grade 1 pupil succumbed to death after he was reportedly bitten by a poisonous snake while on his way home AT about 10:00 o’clock in the evening last night, Thursday (Jan 27), in Brgy. Magbangon, Cabucgayan, Biliran.

The local police said that they received information at noon today that a boy had died from a snake bite in Brgy. Magbangon, prompting them to immediately responded to verify the report. Upon arrival in the barangay, they noticed many people outside one of the houses and inside a woman was crying who turned out to be the mother of the victim.

Initial investigation conducted by the local police disclosed that based from the interview conducted to Lorna Mollejon, grandmother of the victim, that at around 10 o’clock in the evening last night Thursday (Jan 27), the victim was on his way home coming from his grandmother’s house and while on the way the victim was bitten by a snake on HIS right foot . When the victim arrived home he told his mother Era Nogas that a snake bit him. The police said the victim then washed his right foot and lay down to sleep.

However, according to the mother, after an hour she noticed that his son (victim) was already motionless and lifeless prompting her to immediately bring the victim to the Rural Health Unit of Cabucgayan for medical treatment. But Dr. Julieta C. Tan, the Cabucgayan Municipal Health Officer, declared the victim Dead on Arrival.

The family brought the victim back to their house in Brgy. Magbangon and as of press time the cadaver of the victim is yet to be embalmed. – BiliranIsland.com 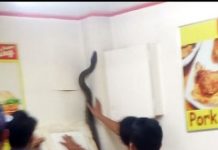