Naval, Biliran— A jobless widower yielded one sachet containing white crystalline substance suspected to be shabu during a buy bust operation about 9:00 in the morning on Wednesday June 15) at Bernardes 1, Brgy Atipolo, Naval, Biliran. Recovered from the possession of the suspect was one sachet containing white crystalline substance suspected to be shabu procured by an operative in the amount of P500. During body search in front of Hon. Noel N Orbeta, National Prosecutors Service representative Jhunafel B. Quilaneta and Media representative Marlon Anthony Mecaral the searching cop recovered from the suspect one piece P500 bill with serial number RC527444 which is a court subscribed money intended for the buy bust operation. Except for the buy bust money, no other illegal items were recovered by the searching cop during the body search of the arrested suspect.

The suspect denied that the recovered item from him was his. But the police say his arrest went through a thorough scrutiny until a buy bust operation was launched against him when the report about his illegal activity was confirmed. Charges of violation of Sec. 5 (selling illegal drugs) of RA 9165, the Comprehensive law against illegal drugs of 2002 is readied by the arresting officers against the arrested suspect who is temporarily detained at the detention cell of Naval Police Station. 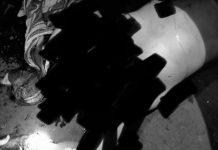