Being an island-municipality, it has been a constant prey to roving pirates and bandits. Its existense dates back during the Spanish Regime in the Philippines, alcades and mayores. They assumed their office by election or appointment.

In 1915, with the people’s clamor for Philippine self-government, Maripipi became an independent town, and Mr. Victoriano Salas was the first appointed Municipal President.

On May 11, 1992, throug a Plebiscite with the majority votes, Biliran became a full pledge Province separated from the mainland of Leyte Province and Maripipi is now part of the Province of Biliran.

The foundation of this barrio dates back in the year 1765. This barrio was previously called Isla De Rosa . In previous years the houses in the barrio were razed by fire in such a way that all the residents left the place. Only after five years had passed that a group of settlers returned and settled in the said island once again. It was also known that in 1768, the Moros that holed-in in the Sitio called Guihum of the Province of Masbate, once a week attacked Maripipi.

Being full of deprivations caused by the ravages of the Moros, the people agreed to wage war against the enemies. In Sitio Awang, the inhabitants dug up a trap of some nine feet deep and covered with bamboo leaves as a camouflage for the purpose of capturing the individual Moros. With this idea, the were able to kill fifteen Moros, and the rest ran away after the bloody fight staged but the inhabitants. In order that they maybe able to protect themeselves from the attack of the Moros, they built a bulwark to serve as a watch tower( lantawan ) in Ermita. This bulwark was guarded by warriors, among them were Capitanes valle, Radam, Rosanto, Toraldo, Florentino, Gahodo, and Ignacio curut.

The island was enclosed with rough terrain. its shores likewise but short by the rampaging wave of the sea in the East and Northeast. The principal mountain of this island superior to the cement used was taken from powdered burned shells an wood mixed with other ingredients.

Way back in 1860, Maripipi was a town located at Danao (present name of barangay) up to 1870. In 1871, it was transferred to Daan Bungto. two kilometers away from seashore. This was located at the Mount Borobatidor, present weathervane af Maripipi.

The town was established at this site to safeguard the populace from the fierce Moros at the time who looted houses near the shore and captured men, women and children for their trade to Borneo. In 1899, Maripipi became a barrio of Kawayan and later in 1915 became a town again, composed of eight(8) barrios namel; Ermitam Binalayan, Burabod, Viga, Agutay, Danao, Bantas, and Binongto-an.

Maripipi island has four(4) anchorage. Two of these are located in the Poblacion (Ermita and Binongtoan) and the other two were located in Barangay Binalayan East and West. During low tide, motorboat took up position offshore. Its shores were clear and steep-to. Cliff details shows the shores to be approachable with the least depth of 10 fathoms at a distance of more than a quarter oa a mile offshore.

Legend has it that the island is a tomb of Maria and Pepe, two lovers. The parents of Maria were against Pepe. Having eloped against the parents’ wishes, the irate father of Maria scoured the four corners of Leyte with a flotilla of bancas in search of the lovers. After a long and arduous search, the flotilla found the lovers in this unchartered island dead by their own hands. 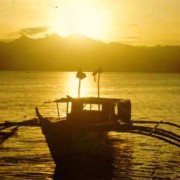