(This guest article first appeared in the 1995 Naval Town Fiesta Program. Mr. Ben Granali is a recognized Naval-based writer who retired from government service as administrative officer of the Naval General Hospital.)

The surging prominence of the town of Naval in the destiny of the Province of Biliran can be seen as that of a favored child of fortune. Naval was the first instant large settlement in Biliran; known in 1600 as Isla de Panamao. Before World War II, it had already assumed a dominant role among the towns of Biliran. Naval became the capital of the subprovince of Biliran in 1959, and undisputedly the capital of the new province in 1992.

The fact that Naval holds the lead in population and will continue to do so can be attributed to its capability to support a large number of people. The territory of Naval comprises a total land area of 10,710 hectares, which is 19.27 percent (one-fifth) of the total land area of Biliran. The fertility of the soil, the abundance of fresh water, evident in its springs and flowing rivers, the beneficent climate and the rich marine resources have drawn people to settle in Naval.

In writing the history of Naval, the author takes the liberty of arbitrarily dividing its history into time capsules as an aid to research and, because of the lack of space, for the purpose of concentrating on the periods of more interest to present Navaleños.

We posit July 4, 1946 as the beginning of the historical period of Naval under the Republic of the Philippines. Naval had gone through the Japanese Occupation unscathed.

Ysaias Icain, who was mayor during the war years, was replaced by Pablo Caneja and Fidel Limpiado successively in 1945, the latter’s term ending in 1947 when Pablo Caneja was elected mayor for the next four years. Absalon Sablada was mayor from 1952 to 1955. He was succeeded by Brigido Caneja, Sr., who served for four consecutive terms.

To one accustomed to the amenities of life, living conditions in Naval in 1946 would seem to be primitive. There were no electric plant, water system, hospital, fire department, nor transportation within the poblacion or to the outlying barangays.

Naval was virtually isolated from the seat of the provincial government in Tacloban City, which was 123 or more kilometers away. There was no road then connecting Naval, Biliran, and Leyte-Leyte; no bridge spanning the channel from Biliran to the mainland of Leyte.

In 1946 a big step was taken in the development of higher education when the Naval High School was opened, making secondary education affordable to students from Biliran (Island). For the school year 1951-1952, the Naval Junior Teachers College (a private school) was organized. It offered secondary and college courses, but the college closed after one year of operation.

During the term of Absalon Sablada, a Liberal, the reservoir at Bungot Spring was constructed and a water system was installed in the poblacion through funds secured by Carlota Limpiado. A Nacionalista vice-mayor of the previous administration, Limpiado turned Liberal in exchange for the construction of the waterworks.

(NOTE: Mr. Granali failed to mention that the name of Carlota Limpiado, a progressive woman leader of Naval, was also linked with the existence of a radio station and an electric service in Naval in the 1950s. There was electric power in Naval until the early 1960s. – ROB)

Naval as the Capital of the Subprovince

On April 9, 1959 Biliran became a subprovince when R.A. 2141 was signed into law by President Carlos P. Garcia. The author of R.A. No. 2141 was the Hon. Marcelino R. Veloso, Congressman of the Third District of Leyte.

It did not take long for the subprovincial officials to realize that the powers granted to the lieutenant governor were limited. R.A. No. 6415 of 1971 was enacted amending R.A. No. 2141 and created the positions of assistant fiscal of the subprovince, subprovincial engineer, subprovincial health officer, and subprovincial treasurer. The law specified that the appointees thereof shall exercise such powers and perform such duties vested in their respective office by law as if the Subprovince of Biliran was a different and separate province.

Uldarico Reyes was appointed the first lieutenant governor of the new subprovince; he was later elected lieutenant governor, thus serving from 1960 to 1967. Dr. Jorge Zamora served his term from 1968 to 1971. Gov. Teofilo Sabonsolin served a 14-year term, from 1972 to 1986. Gov. Jose Gonzales served as an appointee from 1986 to 1988 when he was elected governor; he resigned in early 1992 to run for congressman. With the plebiscite in favor of the provincehood, Gov. Wayne M. Jaro was appointed by Pres. Fidel Ramos as the first governor of the full-fledged province of Biliran..

From 1946 to 1959, 13 had passed and still Naval lacked the necessary services that would improve the way of life of the people.

In 1961, the Naval Emergency Hospital as it was known then and the Naval School of Fisheries were organized in Naval. These two institutions proved to be of great benefit to the people.

The hospital not only served one of the expectations in the pursuit of a better quality of life for the people. It also played a vital role in the socio-economic life of the capital town and of the subprovince. It provided jobs. It funneled money into circulation through salaries, local purchases, and infrastructure projects. It rendered hospital services to the indigent sector, believed to be 80 percent of the population.

The desire of the people to have affordable college education in Naval led to the conversion of Naval High School into an institute. The Naval Institute of Technology was the first chartered state college in the subprovince of Biliran. It was formerly a municipal high school which started its operation on June 3, 1946 pursuant to Municipal Resolution No. 35, series of 1945. R.A. No. 4309, which was passed in 1965, laid down the foundation for the conversion to corporate existence effective August 31, 1972.

In the 1960s, Mayor Brigido Caneja, Sr., gave attention to the municipal water system which was losing water pressure and thus depriving many homes of tap water. During the term of Mayor Arturo Velasquez, he tried to solve the problem of water pressure by regulating the flow of water into designated areas. Gov. Teofilo Sabonsolin himself took an interest in the improvement of the water system.

On April 1, 1980, the Naval Water District was organized for the purpose of improving the water system and insuring the future need for potable water for the growing town of Naval.

By 1980, 34 years had passed since 1946 and still Navaleños were still not able to enjoy the many conveniences that sufficient electric power could provide. Only in 1982, when BILECO (the Biliran Electric Cooperative) installed power lines connected to the geothermal plant in Tongonan were Navaleños able to enjoy its full use.

The enormous fires that devastated Naval in the late fifties, late sixties, and in the seventies could have caused severe setbacks in the economy. Nevertheless, the economy continued to grow. The lesson learned from the fires prompted Mayor Niceto Limpiado to secure two fire trucks.

On March 8, 1989, Bishop Filomeno G. Bactol was formally installed in the Diocese of Naval. By this time, living conditions were much better and conducive to the enhancement of the quality of life.

When Biliran Subprovince celebrated its 30th anniversary on April 8, 1989, many Navaleños believed with other Biliranons that the success of the Movement for the Provincehood of Biliran would cut the umbilical cord attaching Biliran to the mother province.

Naval as Capital of Biliran Province

We can only briefly state for lack of space the progress of Naval as capital of Biliran Province. Conditions are now better for Naval in the matter of access to resources and technologies. Essential infrastructures are now being built with the support of the provincial government.

Naval is now beset by problems of a growing town. The increasing population has aggravated the problems of cleanliness and sanitation, garbage disposal and drainage, which the local administration is now addressing with energy and technological skills.

At the same time, Mayor Pitao is concerned whether the advances in the living conditions of the town, which would lead to a better way of life, are actually available in the indigent sector. Towards this end, the question now arises whether water and electric power are being priced out of the capability of the indigent sector who need to enjoy their uses as much as the moneyed people.

Now the provincial government, with its greater resources and access to national funds, is contributing to the development of Naval in many aspects. The support that Gov. Wayne M. Jaro is giving to the development of Naval is greater than the previous administration. Basic infrastructure programs for Naval include the improvement of the Biliran Airport and the construction of the P12.5-million Naval Port. The hosting of the 1995 EVRAA (Eastern Visayas Regional Athletic Association) Meet has brought dividends in enhancing the image of Naval and the development of its sports facilities. 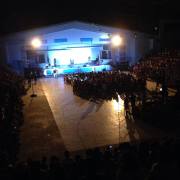 All of me – Gerald Santos Live in Concert