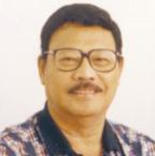 Gerardo “Gerry” S. Espina, Sr. is a recipient of three US scholarship grants, the Smith/Mundt, Ford Foundation and Fulbright scholarships all at the same time, 1962-1964, University of Oregon, USA. A self-made man, he was a ward of Boys Town Orphanage as a young boy, his father having died during the Second World War. He did odd jobs to support himself through high school and college yet, was an outstanding student leader, scholar and campus journalist.

Well known all over Metro Manila where he was a tri-media journalist and where he was elected in 1971 and 1978 as Manila Constitutional Convention delegate and Assemblyman respectively, he decided to relocate to Biliran province in 1994 when Biliran, his birthplace and a former sub-province of Leyte province, became a regular province in 1992.

He therefore holds the distinction of being the first elected Congressman of Biliran and perhaps the only one who has experienced representing in the Legislature an urban and a rural constituency. In the nine years that he was in congress, he was well respected and admired as an eloquent and articulate speaker and a very effective debater. In the words of Mayor Sonny Belmonte of Quezon City who was a colleague of Gerry for several years “Gerry is the only one in Congress I know who delivers eloquent speeches without codigo”, a quotation from an item which appeared in the Philippine Free Press.

In the province of Biliran, most of the national circumferential and cross country roads were cemented when he became congressman of the province. All barangays practically were given electricity; 234 school rooms were built all over the province. Also, all 132 barangay roads became mostly concrete, a total of 104.220574 Km.

Hundreds received college scholarships; one in fact finished medicine and is now in the U.S., the daughter of Mr. Apolinario Gervacio.

As a member of the Interim Batasang Pambansa from 1978-1984 and its Assistant Majority Leader, then President Marcos who had a keen sense of getting brilliant minds to join his executive team, also appointed Gerry as concurrent Deputy Minister of Trade & Industry, Minister of State for Labor, Administrator of EPZA now PEZA, and member of the Presidential Special Committee on Government Reorganization.

Presently three of his children are elected officials of Biliran province while his eldest son is the City Auditor of the City of Pasay. A daughter is an ortho dentist who has a dental clinic in Burbank, California, USA for about 20 years now while also operating a clinic at the 2nd Floor, Vira Mall, Greenhills, San Juan hence, she travels to and from Los Angeles, USA several times a year.