NAVAL, Biliran (PIA) – Twenty-five outstanding Basic Ecclesial Communities (BECs) from the 15 parishes of the Diocese of Naval headed by Bishop Filomeno Bactol received plaques of recognition for their best performance in the parish and the community they serve.

The awarding ceremony which was held at the Cathedral School of La Naval (CSN) compound in Naval, Biliran, a day before the Silver Jubilee Anniversary of the Diocese of Naval on March 8, 2014 was attended by some 1,000 members of the BECs, clergy in the entire diocese and the invited guests.

The activity dubbed as “Kalambuan 25: Pasidungog” was one of the highlights of the Silver Jubilee Anniversary of the Diocese of Naaval.

Likewise, 25 individuals of the parish pastoral council in their respective parishes received plaques of recognition for their outstanding performance.

The individual awardees who have rendered outstanding performance in their respective parishes for 45 years and above include Manuel delos Reyes of Almeria Parish who served for 45 years; Dr. Juan Pastor of the Parish Pastoral Council (PPC) of Naval Parish likewise seved for 45 years; and Catalina Velasquez of the Naval PPC for 46 among others.

The plaque of recognition was handed to the awardees by no less than Bishop Filomeno Bactol and he was assisted by Msgr. Marvyn Maceda, Vicar General of the Diocese of Naval.

Special awards were given to nine priests who worked hard for the diocese.

A plaque of gratitude was given to individual pioneering priests by Bishop Bactol for their contribution to the growth of the church and obedience to the Most Reverend Ordinary.

The awarding ceremony was followed by a video presentation highlighting the different activities of Bishop Bactol in the Diocese of Naval for 25 years since March 8, 1989, a way of the clergy of the diocese to thank the bishop for his visit to their respective parishes through the years.

In his message, Bishop Bactol thanked everyone in the Diocese of Naval especially the clergy and the BECs for their contribution to the growth and development of the diocese.

He informed that when the diocese was erected in March 8, 1989, 25 years ago, they started with only 12 priests in 13 parishes.

“We are very grateful that the 12 priests grew in number. We reached up to 33 priests in 15 parishes in 25 years. Providentially, now, we are only 25. Because of the need of the seminary in Palo, Leyte and countries outside, we have lent some of our priests and even if they are serving outside of our diocese, they continue to help us, especially in this celebration and other events of the diocese”, Bishop Bactol said.

The Silver Jubilee Anniversary celebration of the Diocese of Naval on March 8, 2014 was centered on the theme “Kalambuan 25: Nagdilaab ang Atong Kasingkasing” (Growth 25: Our Hearts Are Burning). (PIA 8 Biliran) 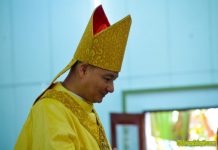 Biliran bishop vows not to succumb to political pressure Diocese of Naval has new bishop