NAVAL, Biliran (PIA) – Some P17,407,712.00 worth of farm and fishing implements and other benefits were Agriculture Secretary Proceso Alcala’s early Christmas presents to farmers and fisherfolks in the entire province of Biliran.

In his encounter with farmers and fisherfolks from the eight municipalities of the province of Biliran at the Naval gymnasium, he awarded to the local government units 2 sets of pump and engine (DA-CO) ; 90 bags of corn seeds; 3,987 doses of veterinary drugs and medicines; 1,071 packs of hybrid rice seeds; 4 units of 4WD Tractor; 210 sets of garden tools; and 1 unit rice cutter from the Department of Agriculture (DA).

[Admin] PHOTO: Some of the production inputs to be distributed by DA to Yolanda-hit farmers, fishers in Biliran today pic.twitter.com/hPPjp60BEB

Items from the Bureau of Fisheries and Aquatic Resources (BFAR) were 60 units 5.5 HP marine engine, and 200 units gillnets and fishing gears.

Aside from the farm and fishing implements and supplies awarded to farmers and fisherfolks through their respective LGUs, Sec. Alcala ordered to raffle off 10 heads of carabaos with plow and harrow, 20 units fiber glass unsinkable boats with engine, 20 sets garden tools, 5 modules of sheep, 5 modules of goat, 100 packs complete fertilizer; 50 pieces hat; 30 pieces t-shirts; 5 pieces umbrellas, and back packs.

He also talked with the local farmers in the area as well as the other farmers and fisherfolks all over the province for their concerns to be given the necessary interventions the soonest possible for their total recovery from the rampaging typhoon Yolanda that devastated their homes and livelihoods. 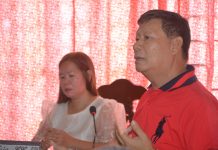