Naval, Biliran — A remorseful suspect in the rape slay of a KTV bar employee said in an interview that he will face the consequences of what he did to the victim, who he claimed to be his girlfriend for a year.

The suspect identified as Clinton Villarin y Sanchez, aka Bebe, 19, single, laborer, a resident of Sitio Bliss, Brgy. Calumpang, Naval, Biliran was arrested about 11:40 in the evening of Wednesday. He admitted to the killing of Michelle Saludo y Flores, 24 a KTV bar employee, and a resident of Sitio Tubod, Brgy. Tabing, Tabango, Leyte.

Police Chief Master Sergeant Jimmy Delima, of the Naval Police Station, who led the arrest of the suspect, said that last night while conducting patrol of the entire town, Chairman Jonnel Quilaneta of Brgy. Santissimo Rosario reported to their station and averred that his uncle Avelino Puso, of Brgy. Tamarindo, Almeria, Biliran, is the step father of the suspect. Quilaneta said that the suspect was willing to surrender provided that he will be escorted by police. Delima said that together with Chairman Quilaneta, and Puso, along with policemen from Almeria, they went to Tamarindo and arrested the suspect there. He alleged that he and the victim were on for a year, but that the just took advantage of him.

During interview with the suspect at the police station here, he narrated that he came from a drinking session with four other friends and after their session they decided to adjourn. But while going somewhere, he saw the victim along the way and immediately went to her to talk.

But a light from a coming garbage truck illuminated them and made him pull victim toward the entrance of the warehouse of LBC.

Biliran Island interview of the suspect of the rape-killing of Michelle Flores. His account matched with what was recorded by the CCTV Camera, except that he denied he raped her.

Hidden by a parked vehicle of the warehouse, he alleged that the victim wanted to end up their relation, which irritated the suspect. He said that she was kicked by the victim when he made sexual advances to her, prompting him to choke the victim with his hands. He added that because of this, the victim told her that if he wants her body he can have it while pleading not to kill her.

The suspect claimed that the victim undressed herself and he also undressed himself and they made sex.

But the suspect claimed that he was so irritated with the victim when she wanted to end their relationship, which prompted him to choke her.

Not satisfied, he smashed the head of the victim on the concrete floor several times, which resulted in the victim bathing in her he own blood.

After the incident, he left the area and went to his friend’s house.

In that house, he said somebody has already suspected that he was involved in the killing of the victim. This made him decide to return home to Almeria, where his step father made him surrender to the authorities.

The Naval Police is preparing charges of rape with homicide against the suspect, who is languishing at the detention cell of Naval Police Station. – BiliranIsland.com 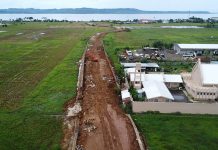