The long wait is almost over after the long and arduous months of providing protections and extending safeguards to the ballot boxes containing ballots, election paraphernalia and other vital documents used in the May 10, 2010 synchronized national and local elections in Biliran province. Anytime this week, the “very hot election commodities” will be transported to Manila for the inevitable manual recount of the protested ballots used in the 166 clustered precincts in the eight municipalities of the province.

Previous insights proved that when the House of Representatives Electoral Tribunal (HRET) ordered for retrieval especially when an election protest is sufficient in form and substance plus no counter-protest from the protestee, then the next step is the appreciation of ballots thru revision as provided by the HRET rules.

Though the process is almost done yet Biliranons would still continue to remain adamant and vigilant with the next few steps of the process until who the candidate was who won the real trust and confidence of the people in the May 10, 2010 elections in Biliran province.

Yes, the recent developments are worth celebrating as masses and parties are attended now by the people who spent their sleepless nights for a cause worth serving for held now in several key municipalities in the province.

Reaching almost the end of a long journey in the quest for truth and justice is so touching for people who toil their way through “sweat, blood and tears” to achieve the desired goal of determining who the real winner is in the hotly contested congressional post having only a slim margin of 361.

We all admit that Comelec had already declared a winner but succeeding turn of events showed that there was an iota of doubt casted on the results. Evidences of fraud came into picture in official investigations conducted by proper investigating body.

As a Smartmatic official succinctly puts it in his famous line in a TV ad which says “ you cannot cheat without leaving a trail” strengthened the doubts that there was really cheating in the local positions.

After all these trials in the political life of Biliranons are over after the determination of the real winner based on the HRET decision, then let us all go back to our ordinary routine in life as a law abiding citizen willing to support and rally the programs and projects espoused and promoted by the legally acknowledged representative of the people in the Lone District of Biliran in the 15th Congress.

The bottom line of this thing was best described in Aruelo, Jr. v. Court of Appeals which the Court ruled that “over and above the desire of the candidates to win, is the deep public interest to determine the true choice of the people.” 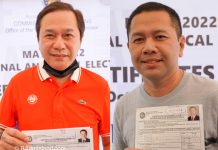