Biliran is one of the severely hit areas in Eastern Visayas Region during the onslaught of tropical storm Urduja on December 15-16, 2017 due to landslides and floods.

According to Adongay, preparation of Program of Works (POW) and Plans for the repair of said typhoon-damaged infrastructures is now on-going.

Adongay revealed that construction for the new CarayCaray Bridge and Catmon Bridge at Naval, Biliran will be included in the district’s 2019 project implementation.

It can be recalled that said bridges were badly damaged during the onslaught of typhoon Urduja. These are among the major bridges that connects the province to mainland Leyte.

The Province of Biliran is one of the country’s smallest provinces with a land area of 536 square kilometers and a population of 171,612 as of 2015. Formerly a sub-province of Leyte, it became an independent province in 1992. 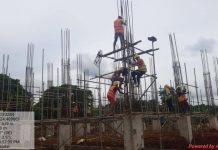